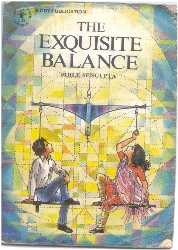 Suprabha and Subir’s mother always thought that being twins, her children would have a lot in common – not just physically but also in their ways of thinking. But she realised gradually that her daughter, Suprabha, and son Subir, were poles apart.

And Suprabha was not like other girls, either. She wanted to play football. She had a passion for the game and could play better than many of the boys in her colony. Unmindful of the taunts of Subir who always said that football was not a game for girls.

Their mother knew of Suprabha’s mettle but was not able to do much to encourage her except empathise with her. After all, how many people have heard of a girl playing football?

An excerpt from the book:

Hru looked puzzled at her intensity. “No, there is no difference at all. Why should there be? It is only the body that has a gender. The mind has none.”

One day while playing in the garden, Suprabha came across a sparkling, diamond like stone. She kept it in her pocket.

Strange things began to happen in her colony, Phul Vihar, as a result. Nobody except Professor K. and Hru knew about it. It is only towards the end that Hru shared the secret of why all these magical things happened with Suprabha.

‘The Exquisite Balance’ deals with gender roles in a very subtle way. Gender roles are our expectations of how a boy and a girl should behave in society. A boy can play rough games and stay out longer than his sister. A girl doing the same, is generally frowned upon. It is so because gender roles have already been ascribed to them. That is why people couldn’t understand Suprabha’s passion for the game. Football is after all, a boy thing, that most ‘manly’ of games.

In reality boys and girls have the same capabilities and by predetermining their roles for them, we actually limit their capacity to do a number of things. A recent British film ‘Billy Elliot’, depicted the struggle of an 11-year-old boy from a miner’s family to become a ballet dancer, always been regarded as a girl’s profession. The boy’s determination to master ballet clashes with notions of what little boys should grow up to become, in his mining community.

Through her story of a girl who loves football and wants to make it a career, Poile Sengupta introduces the idea of gender stereotypes in our society. Gender stereotypes are nothing but very fixed ideas that society has regarding the roles that boys and girls, or men and women must play. For instance, rebuking a boy who crys readily with the words, “act like a man”, or telling a girl who likes climbing trees, to “be ladylike”.

But what if the boy finds that crying releases his pent-up emotions and the girl likes nothing better than climbing trees and wrestling in the mud? Shouldn’t we just let them be?

Manisha Deveshvar
It is the month of Ramadan (Ramzan) in the Islamic calendar and, for those who believe in it, each day of the month follows...
Features for Kids

Sushama Shetty
Did you know that animals, birds, reptiles and humans learn the lessons of life through play? Any object can be used as a toy....
Features for Kids

Gargi Pant
I am writing this as I am travelling in my time machine. I know how important it is to keep a diary of happenings....
5 Ws & H

How do Ducks Stay in Water and not Get Wet?

Chitra Padmanabhan
When you get out of the swimming pool or bathtub, you are soaking wet. Had you been a duck, you would be swimming in...
Features for Kids