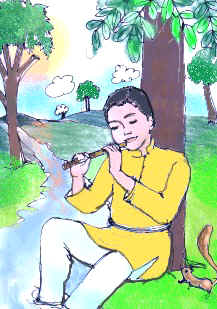 Share
Facebook
Twitter
Pinterest
ReddIt
Email
“Bajai,” as we called grandmother, was the best storyteller in the whole world, says Madhu Gurung. She lived in the foothills of Mussoorie in a tiny village called Johri Gaun. And she always started her stories with a saying, “To the listener a garland of gold, to the storyteller a garland of all forest flowers and this tale that I tell you today will be heard in heaven.” Here Madhu Gurung presents one of the many stories that she heard from Bajai in her childhood.

In the small village of Johri by the foothills of Mussoorie, lived an old man and his wife. They had a simpleton for a son. He was a gentle lad with small lively eyes and gentle manners. His name was Shebu.

All day long, Shebu sat by the bubbling brook playing the flute for his goats or watching the silver fish frolic in the stream. The animals loved him and did not fear him.

But the old couple worried about what would happen to Shebu after they were gone. “What will happen to our Shebu?” asked the old woman to the old man as she milked the cows. The old man looked at her and did not answer. From a distance, the gentle valley breeze carried the sound of Shebu’s flute.

That night the old man could not sleep. He woke up early in the morning and gently nudged his sleeping son awake.
“Wake up Shebu, I have something for you.”

Shebu woke up and rubbed his eyes. The sun was just rising turning the sky golden with its rays. The cocks were crowing and the birds were chirping.

Shebu followed his father to the barn outside. The old man came leading a long-haired white mountain goat. Shebu looked at the goat and grinned. It was his favourite goat. He had named it Moonmoon. For, when it leapt up to eat the wild berries, Shebu felt he was trying to leap up to the moon.

“Take the goat and go and seek your fortune my son,” said the old man. “But I have one condition, you must not sell the goat nor kill it to sell the meat and you must come back with some gold.”

Shebu nodded and took the goat, touched his father and mother’s feet and climbed the steep mountain path to Mussourie.

All day long he walked up the narrow path, ate wild berries and drank from the swift cold mountain springs. He let Moonmoon graze in the meadows.

By dusk, he was high up the mountain path. The sun was setting and Shebu settled down by a huge rhododendron tree and leaning against its trunk, he looked at Moonmoon who sat besides him. “What did father mean by saying I am not to sell you or kill you for meat. How can I go home with gold, if I don’t do either of the two.”

He patted Moonmoon who nickered softly and gently nibbled at his hand as if to comfort him.

Shebu put his head next to Moonmoon and lay down besides him. The birds were coming home and they were all settling down all over the trees. Shebu looked around and he heard soft laughter. He looked around and saw a group of girls coming to collect water.

He sat up as a young girl approached him. Her ankle bells tinkled delicately. “Would you like some water?” she asked. Shebu nodded and held out his hand as she poured him some water from the pot to drink.

Shebu liked the young girl on sight. She was very pretty and when she smiled Shebu was mesmerized.

“My name is Junali, ” she said. Shebu thought that was a beautiful name for a beautiful girl, for, it mean a startlit night. “What’s your name?” she asked him.

“Why are you looking so worried, Shebu?” she asked. Shebu shook his head and told her about his father’s condition.

Junali thought for a while and patted Moonmoon and laughed. “That’s simple. Why don’t you cut his hair and sell it to the carpet-makers who make woollen carpets.”

Shebu laughed aloud. He had finally found a solution to his father’s condition. “Thankyou, Junali. I had never thought of that at all.” Besides him Moonmoon nickered softly, happy that his master was happy at last.

The next day, Shebu took Moonmoon to the village barber and got his goat seared. He then took the hair and sold it to the carpet-makers. As Moonmoon’s thick white coat was what the carpet makers were looking for, they paid Shebu handsomely with gold coins.

The next day, Shebu led Moonmoon and travelled down to his home. He held aloft the bag of gold coins and hugged his old parents, happy to see them again.

The old parents were overjoyed to see Shebu and thrilled that he could come up with the solution so fast. “Who helped you my son,” asked the old man.

“A young and beautiful girl called Junali, ” said Shebu. The old couple exchanged looks for they were impressed with the young girl’s intelligence.

“She is the right person for our Shebu for she is intelligent,” cried the old mother. “After we are gone she will look after our Shebu.”

So, early next morning, the old man travelled up the same path that Shebu had taken. He went to Junali’s home to fix the marriage of his son, Shebu, with her.

Shebu and Junali were married and they lived happily ever after and they would often tell their children how they met because of Moonmoon, the goat.

Rama Kumaraswamy Thoopal
The next time someone calls you an ape or a bird brain, ask her to think again. Brain scans of animals have revealed similar...
5 Ws & H

Ritu Asthana
One of the earliest memories I have as a child is when I was approximately three or four years old. I remember watching my...
Stories for Kids

Sanyukta Chaudhuri
Poltu was wide awake in his bed. He had had a marvellous dream in which he had won the football match in the inter-school...
Planet Earth for Kids

Ashok K Vaish
Through the long and dark Arctic winter, the mother Polar Bear sat quietly in her den. She had given birth to her cubs, and...
5 Ws & H

What is Ham Radio?

Ajay Dasgupta
Consider this, your state has been hit by a cyclone with wind speeds measuring 300 kilometres per hour. All modern means of communication -...