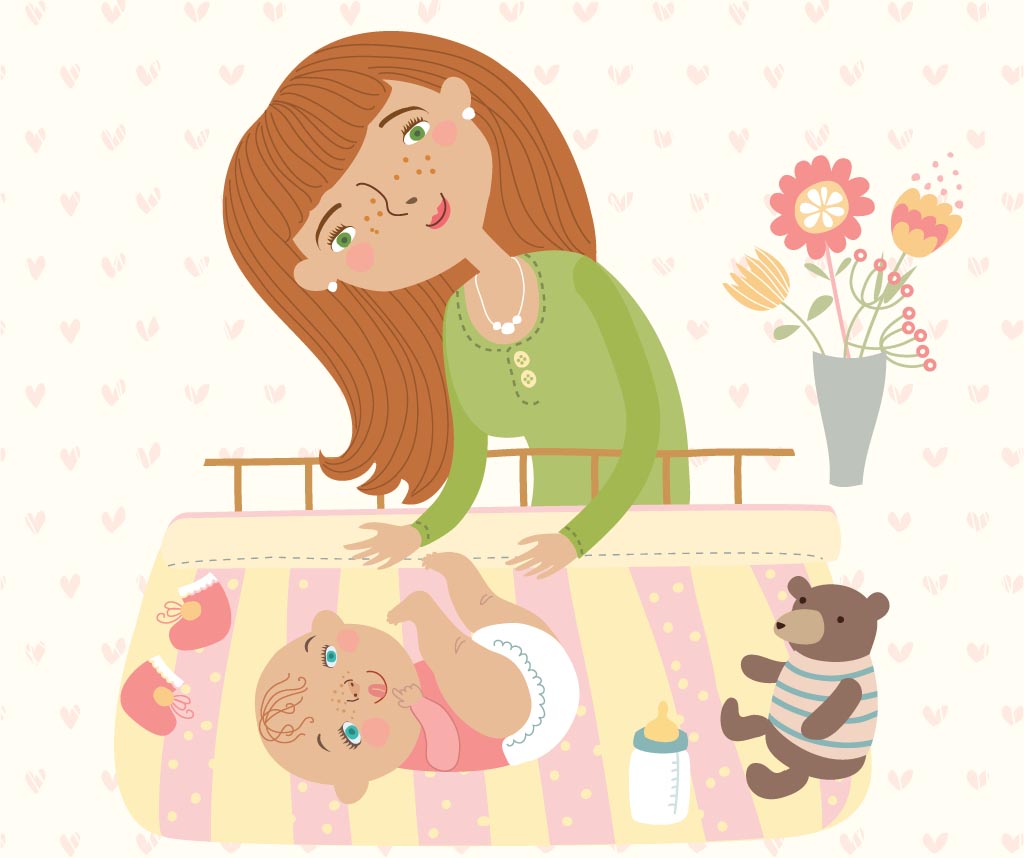 It all began when Shubhya walked into her friend Diya’s house one evening. The Sharma household was agog with excitement. Shubhya was quite surprised to see so many people at Diya’s house. All of Diya’s aunts, uncles and various cousins were around. Even her grandparents had arrived from Jaipur.

Shubhya wondered what was up. Suddenly, Diya spotted Shubhya. “Shubhya”, she shouted excitedly, “I’ve got a baby sister! I had told you that we were going to get a baby. Now I have someone to play with all the time. Come and see her.”

But Diya was just too happy. “Mummy says that’s only for a short while. Then they learn everything”, she said. “And I’m going to take her out in the stroller every evening. Oh, it’s going to be such fun. And we are going to call her Riya, because it rhymes with my name!” With that, Diya danced off to take another look at her sister.

At dinner that evening, Shubhya minced no words. She too wanted a baby and that too now, she declared. Her parents tried to pacify her and distract her, but Shubhya was single-minded. At bedtime Shubhya was in no mood to be read to. Her mother sat up trying to explain how it takes time for a baby to arrive and that it could be a girl or a boy.

“No way,” sobbed Shubhya. “I also want a little sister just like Diya’s. I also want to play with her all day long and take her out in the stroller.” All the explaining her mother did made no sense to her. She simply could not understand why her parents were being so difficult. Crying, Shubhya rocked herself to sleep.

Her parents hoped she would forget all about the baby by next morning, but they were mistaken. The demand for a baby sister kept getting louder and louder, and the more Shubya met Diya the more she persisted.

This five-year-old was not only making it very difficult for her parents, but also for herself. Complaints trickled in from school about how she would throw tantrums and break into sobs at the drop of a hat. Her parents began to get upset with Shubhya. This only made things worse. It was time to take some serious action.

After a lot of thinking, Shubhya’s parents decided to call her grandparents. When Shubhya returned home from school, she was thrilled to see her Dadaji and Dadima. “I’m so happy you have come Dadima. Mummy and Papa are not getting me a baby sister,” Shubhya complained. “Why can’t I also have a baby sister?”

Over the next few days, Dadaji and Dadima spent a lot of time explaining to Shubhya, but no logic would work. The excitement of having her grandparents soon wore off and she was back to being very quiet, yet difficult. It was ‘Baby Girl’ and that too ‘Now’.

It was at the breakfast table one morning that Dadaji had a superb idea. When he shared it with everyone, Dadi immediately said, “This is wonderful”. Shubhya’s parents too nodded in unison. “But let this be a secret”, said Dadaji. “We’ll only let Shubhya know at the right time. Now let’s get down to some serious work.”

Over the next many days, there was much excitement among the elders, but Shubhya was completely unaware of it. As they went about telephoning people, writing letters, and visiting places, Shubhya was still sad and very upset with her parents. Even the outings to the park every evening stopped because she never felt like it. As for playing with Diya, it was a big ‘No – No’.

A couple of weeks passed by. And then one evening when Shubhya’s parents returned from work, Dadaji had some good news for them. “It’s finally happened!” he told them. “This Saturday is going to be very, very special.”

On Saturday they all set out in the car, this time with Shubhya. “Where are we going mummy?” asked Shubhya. “You’ll soon know Shubhu,” her mother said, hugging her tightly. The elders had a mischievous grin on their faces. Shubhya wondered what was up, but didn’t ask.

The car came to a halt near a big red brick building. “What is this place Dadaji?” asked an inquisitive Shubhya. “We haven’t been here before, have we?”
“No we haven’t Shubhu,” replied Dadaji. After a pause he continued, “This is Mother Teresa’s home for abandoned children. You are a little too small to understand what it’s all about, but you are going to get a big surprise here.”

Shubhya’s eyes lit up. She clutched onto Dadaji’s hand tightly and walked into the building.

Inside, a lady dressed in a white sari with a blue border greeted them and led them into a large room. “Please be seated. I’ll be back soon.” Saying this she disappeared into the next room.

Sister Agnes returned soon. And this time she was carrying a cute little, curly-headed, bright-eyed, six-month-old baby girl. She got the baby close to Shubhya and said gently, “This is your baby sister.” Shubhya was wide-eyed with disbelief. She ran to her mother in sheer delight and asked, “Is she really my sister?”

“Yes Shubhu”, replied her mother. “She’s all yours. Do you like her?”

“I love her!” screamed Shubhya. “Now I have someone to play with all the time!”

“I think we should call her Divya,” suggested Dadima.

“Because it rhymes with Shubhya!” they all said in unison.

And little Divya gurgled at that.

Flower on the Road

Chitra Padmanabhan
Spring has come, said the bougainvillea Crimson, orange, cream and yellow Making a flower wall along the road I bring happiness to all. Wait, said the little flower on the edge of the kerb I,...
Stories for Kids

Sanyukta Chaudhuri
Poltu was wide awake in his bed. He had had a marvellous dream in which he had won the football match in the inter-school...
Quizzes for Kids

Team Pitara
Seasons not only tell us the time of the year in different landscapes, they are intimately connected to human emotions and experiences as well....
5 Ws & H

Ajay Dasgupta
Which is the most famous sheep in the world? A sheep called Dolly. But why is Dolly famous? That is because unlike other sheep's, Dolly...
Biographies for Kids

Brishti Bandyopadhyay
Amelia Earhart was one of the world's most celebrated aviators. She broke records and charted new skies in the course of her short life....