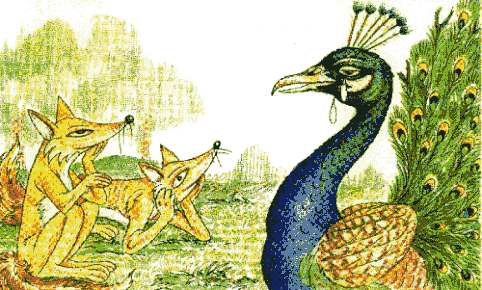 Haka and Phaka, the twin jackals were feeding on some juicy berries. They sat eating their berries with their mouths and paws quite blue with the juice.

They were enjoying themselves thoroughly when they saw Mor, the peacock, strutting down the path hurriedly. The poor bird looked terrified!

“We peacocks are in great trouble Haka. Humans are hunting us for our feathers. There is not a moment of peace!” Mor was in tears. “I believe they are making fans and other things out of our feathers,” sobbed poor Mor.

Suddenly they heard some commotion, followed by human voices coming in their direction! Mor took off, cursing his heavy body. He just about managed to fly off to a high branch on a tree and hide himself. Haka and Phaka dived into a bush.

Soon, some tough looking men appeared. They held a bunch of peacock feathers in their hands. They looked around desperately to see where Mor could be.

“That wretched bird came this way!” shouted one of them..

“We could not possibly have got a whole bunch from that one!” said the other menacingly.

After a fruitless search, they left the forest.

Relieved, Haka and Phaka emerged from their hiding. And so did Mor.

All three started to think seriously.

“Hey, let’s go to Ulluji for advice!” Phaka suggested. For Ulluji was the forest counsellor And, indeed, he was a wise owl.

Ulluji had just lunched off some fat mice. He came out of his hole in the jamun tree and asked them what their problem was. Taking it all in, word for word, he sat absolutely still for about ten minutes.

Then, he hooted three times and adjusted his glasses over his thick beak. “I want Hoohoo, the wolf. Bring him to me,” he announced.

Hoohoo was sleeping under a tree. Haka, Phaka and Mor woke him up, and brought him to Ulluji, whose plan was very clever indeed. But Hoohoo refused to dress himself in peacock feathers. “The other wolves will make fun of me,” he protested.

However, they finally managed to convince him that it was, after all, for a good cause.

“Do you know what happened to Kawkaw the crow when he roamed about in borrowed feathers?” Hoohoo said sulkingly.

“Come off it, this is not the same thing!” exclaimed Haka trying to convince Hoohoo.

Well, ultimately they succeeded. Hoohoo agreed to the idea. Four more wolves were included in the plan.

On a bright sunny day, the same three tough looking men entered the forest to collect peacock feathers. They had a large order from a fan manufacturer.

After two tiring hours of hunting, they suddenly spotted five rather large and healthy looking peacocks picking berries from the ground.

Carefully and stealthily they crawled towards them. When they were close enough, they pounced! To their horror, the peacocks turned round, snarling and growling fiercely! They first attacked their hands and legs, and soon enough; grabbed them by their throats!

With great difficulty, the poachers managed to escape with their lives.

Word spread around the villages like fire. The news was that peacocks had somehow grown teeth, and had become as fierce as wolves!

Hoohoo and his companions had a jolly good laugh, till their stomachs ached! And, all the jungle peacocks were now safe. Mor looked like he should. Proud as a peacock! And he strutted off, fanning out his feathers, ready to dance for his companion Morni.

The Scent of an Enemy

Chitra Padmanabhan
It seems the fish were always a smart lot. Only, humans took some time to realise the fact. Some years ago, scientists had discovered...
Stories for Kids

Benita Sen
It happened not very long ago. But when you're a snail, days move at snail's pace, too. So, if you were to ask our...
Features for Kids

Brishti Bandyopadhyay
A lush green forest in the middle of a rocky wasteland. No, this paradise is not an illusion. Abdul Kareem has created it with...
Stories for Kids

Ramendra Kumar
Mohanty ma'am was teaching the class five students of Arya Wonderland about similes. "As beautiful as?" she asked, looking at the students. "The rose, the Taj...
Stories for Kids