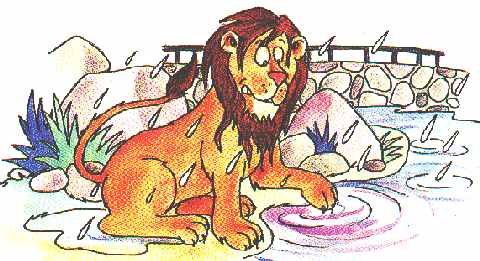 Once it started raining, it just wouldn’t stop. The sky wept great tears in an endless stream until the clouds had entered everyone’s hearts and made them feel as grey and weepy as the weather. But still it rained on and on.

Everyone stayed at home, gloomy and bored. “I wish we could DO something,” moaned Geeti, “Nothing exciting ever happens to us” said Vikki.

Mummy wouldn’t let them go out but she tried to cheer them up by baking a cake. The children helped too. The cake was yummy and they ate it hot. The rest they covered and left on the table.

“I wonder what the animals and birds do?” asked Geeti thoughtfully.

“They must be cooped in their cages.”

“No, silly, I mean the wild ones. The tigers in the jungles, the birds on trees, what do they do in all this rain?”

“At least they’re free. Think of the animals in the zoo. How awful for them.”

And it was true. The animals in the zoo were worried and irritable. The wetness was terrible for the creatures big and small.

The more it rained, the more everything filled up with water. The moat around the lion’s enclosure filled up too. The lion watched. He was an old fellow, who had never been out of the enclosure. He had never seen anything like this before., As the water lapped the sides of the moat temptingly, the old fellow decided to make a go for it. He sniffed here, and he sniffed there. He put one paw delicately into the water and then, with one big breath, he jumped right in.

At first he sank. Then he panicked. He thought, for one awful moment that he was going to die. But he didn’t. His mighty head popped up and he paddled along until he could feel the wall just under his chin. Putting his big paws onto the wall, he heaved himself up. And then he was out. Out and free. Free to walk around the world, just as he had seen hundreds of people do. Now he, the mighty raja was going to have the adventure of a lifetime.

No one saw him for it was night and all the zoo keepers were fast asleep. Lion walked out, king of everything he saw. Softly, softly, he crept on padded feet to the enclosure next to him. He grinned in at the bear who woke up with a start.

He looked in at all the cages and thought how wonderful it was to be free.. Then he had an idea. He was going to be really free. What was the point of freedom if he was still within the four walls of the zoo? So, asking the way at every cage he passed, Lion reached the main gate.

He could smell a human. He carefully peered into the ticket booth. Sure enouch, the guard sat there. Lion was a clever old fellow and knew that the guard wouldn’t let him just walk out. So he waited and watched. The guard didn’t move. He snored gently. When lion was sure that the man was fast asleep, he padded his way past him gently.

“Hmmm – humph…” said a guard in his sleep. Lion almost roared in fright. But he didn’t, he waited quietly until he was sure that all was safe. And then he was FREE! Really free, for the very first time in his life.

He walked around, looking with wonder at the big, black, wet roads. He stared up at the high buildings and he sniffed at people huddled up, asleep in the driest corners they could find. One little child peeped out of his thin blanket and saw him. “Papa,” he whispered, “there’s a lion on the loose!” “Yes. Yes,” said his Papa sleepily, “he’ll go away, now get back to sleep.”

And lion went on. This was the longest walk that he’d ever had. He was in the bazaar now. But, of course, everyone was fast asleep. He peered into shop windows, fascinated by the glittering things that shone there.

He walked on and on. On and on. Until he was one very wet, hungry and tired lion. He now suddenly caught the smell of freshly baked cake. He’d never smelled anything so invitingly warm or warmly inviting. Sniff! Sniff! Sniff! He found the window to Geeti and Vikki’s room open. Quickly, quietly, he jumped right in. He saw the children asleep in their soft, warm beds. And he felt like getting in with them. But first to find out where that delicious smell was coming from. Sniff! Sniff! Sniff!

And now, to bed. Slipping back into the children’s room, lion tried to get into Vikki’s bed.

Next morning, mummy woke up to find the cake missing.

“Then who could it have been?”

“It must have been the lion!” said Geeti.

“She’s not being silly” said Vikki.

“There’s a lion under our bed!”

“What?” shouted mummy as loudly as she could. And she rushed right away to look for the lion under her children’s bed.

“But there was mummy,” protested the children. “Look, there are lion paw prints on the carpet.”

“And a big wet patch on our beds.”

“And lion hair on my sheet!”

Mummy had to believe them then, but try as they might, they couldn’t find the lion any more. And do you know why? The lion had a good snooze and decided to get back to his cage before there was any fuss. So he had slipped away at dawn and no one saw him going. He slipped past the guard who still lay asleep and swam back into his cage. What an adventure it had been! But he was glad to be home.

As soon as the rain stopped, Geeti and Vikki went to the zoo. They stood outside the lion’s enclosure and whispered to each other. I’m sure that our lion recognized them too, and let out a big rumbling ROAR of a thank you to his little friends.

Maybe, next time it rains very hard, Lion may come to YOUR house, so remember to give him some freshly baked cake!

Bindu Mishra
Come monsoons, and we immediately think about the beautiful peacock, dancing in the rain, with its luscious tail spread out behind it. Undoubtedly one...
Features for Kids

Chitra Padmanabhan
When I was in the fourth standard, I got my first real diary as a present from a cousin. It made me feel very...
Biographies for Kids

Team Pitara
Martin Luther King Jr. goes down in history as one of the principal leader of the civil rights movement in the United States and...
5 Ws & H

How do Satellites Stay Up?

Jim Nicholls
Satellites orbit the earth because of the force of gravity. To understand why this happens and why the satellite does not get pulled in...
Features for Kids

Chess for Children: A Smart Move

Chitra Padmanabhan
When we think of chess we think of two adults sitting opposite each other, thinking of ways and means to outsmart the other. Many...