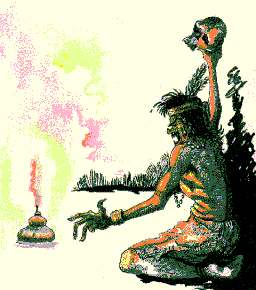 In a village hut, dimly lit by a diya, members of the household sit in a frightened circle, watching a tantrik muttering mantras and performing strange rituals with a skull perhaps, the thighbone of a sheep, and other items.

Sitting among the women is one who has wild staring eyes, untidy hair and a strange expression. She speaks in a voice that doesn’t seem to be her own. Everyone present is convinced she has been possessed by an evil spirit which the tantrik must now get out of her.

The spirit has demanded that a goat be sacrificed and given to the tantrik. And it will leave its victim only after being given good food, sweets and clothes. All this has already been told by the possessed woman, so the family has arranged for everything.

Having finished his fearful rites, the tantrik brings out a parad — the large flat pan in which we knead flour, he has also brought along a lota placed carefully beside him. He now pours out its contents — the red blood of the sacrificed goat — into the pan. In the centre he places a candle on a stand. Then muttering mantras, he places the empty lota over the candle so that it rests upside down on the pan. As the terrified people watch, the blood is slowly drunk up by the spirit until it disappears! The gifts, sweets and other good things are presented to the victim who is now all smiles. The tantrik quickly picks up his knick-knacks and carefully carries the pan away into the darkness with the lota still inverted the candle. If he has indeed been presented with a sacrifical goat, he can look forward to mutton for dinner. He may also have asked for a cock for chicken curry.

Where’s the catch? There is actually one clue which points to fraud. Blood congeals; it doesn’t remain a liquid which can be poured from a lota. The blood-red fluid is probably a solution of potassium permanganate.

The disappearance of the blood is explained by physics: the burning candle uses up all the oxygen under the inverted lota.

This creates a vacuum which draws the blood-red fluid into a lota. The tantrik carries the pan and lota very carefully. If the lota is jolted and tilts the “blood” will gush out, and his reputation will be ruined.

Many psychological disorders can be traced to personal unhappiness, hardship, ill-treatment and need for love and affection. “Spirit possession” is one way some victims are able to get the attention and respect that they crave. For a time at least, everyone around them is ready to grant all their wishes. This the tantrik knows. He is also a good psychologist and he is sure he will be called in again when the victim becomes possessed, because it helps her as much as it helps him to earn a livelihood!

What is Ham Radio?

Ajay Dasgupta
Consider this, your state has been hit by a cyclone with wind speeds measuring 300 kilometres per hour. All modern means of communication -...
5 Ws & H

Ajay Dasgupta
The sun is a star, just like the thousands of others we see in the sky each night. But it looks so very big....
Festivals for Kids

B Sumangal
"Trick or Treat!" shout little witches, paper-bagged goblins, rubber-masked imps and bed-sheeted ghosts as they extend a bag across for candy. It is October...
Features for Kids