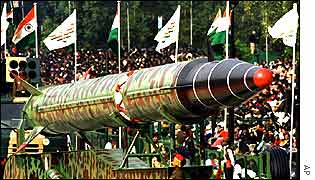 April 12, 2007: The newspapers have splashed the news across the front page. TV channels have gone ballistic. India today test fired a missile that can reach as far as the Chinese cities of Shanghai and Beijing and most of the region of West Asia. A missile is basically an object or weapon that is fired, thrown, dropped, or otherwise projected at a target. It could be as simple as a rock shot off with a catapult (where the rock is the missile) or a toy car zooming out of a launcher (where the toy car is the missile). TO send it on its way, scientists use a launcher that can give the missile enough push to cover a large distance.

The military had reasons to celebrate. In the last couple of years, the Agni missile has been dogged by repeated failure. Getting Agni-III off the ground, and down where they want it to, is a major achievement. Scientists say the missile can go even further than cities in Asia, if the missile is made a little lighter.

The world’s first weapon missile was used by the German army against British and Belgian targets in World War II. Today, many more countries have the ability to make and fire such deadly missiles. They are seen as countries with military might.

The Agni-III is an intermediate range ballistic missile or IRBM which can carry a nuclear bomb. To see if the missile actually goes where they want it to go, scientists launched the missile from Wheeler Islands off the coast of Orissa, a state in north-eastern India. The missile climbed 90 km up, and then dipped down to return into the atmosphere and targeted an impact point near Car Nicobar Island. To the scientists’ delight, the missile hit the ground exactly where they wanted it to.

In Asia, apart from India, its neighbours like China and Pakistan also boast missiles. The reason countries give for building such missiles is “deterrence”: this means you have a weapon (that you don’t really want to be forced to use) that will stop another person from using his weapon against you.

Brishti Bandyopadhyay
Christmas celebrates the birth of Jesus Christ. Everyone knows that. Do you know the entire story of his birth? Let me narrate it in brief....
Features for Kids

Manisha Deveshvar
Almost two years ago, a blind pastor, Reverend Jorge Spielmann started a restaurant for the blind in the city of Zurich, in Switzerland. Almost...
5 Ws & H

Saakshi Khanna
A routine college day. We had to go for textile practicals after lunch. Going for any class post lunch was a pain. All we...
Stories for Kids

Gargi Pant
Somu loved to read ghost stories. Every time he paid a visit to the library, he got back a teeth-chattering horror tale. It was...