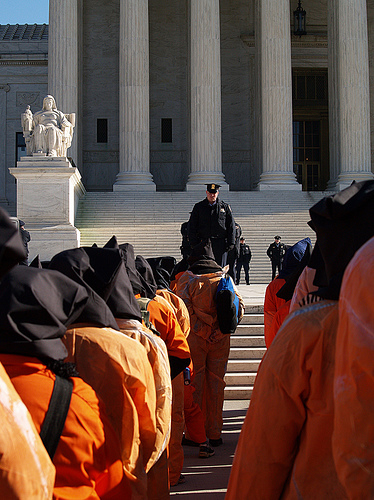 December 19, 2008: The controversial prison camp, Guantanamo Bay Detention Center, may finally be closed. US Defense Secretary Robert Gates has ordered that plans be made to close the prison that houses “alien combatants” accused of supporting terrorist activities against the United States.

Often colloquially referred to as Gitmo (a spoken version of GTMO, which stands for Guantanamo), the Guantanamo prison was set up just after the September 11, 2001 attacks in which terrorists hijacked planes and crashed them into the World Trade Center buildings in New York, the Pentagon in Washington, and one plane that crashed because passengers tried to overcome the hijackers.

At GTMO, hundreds of people living in America and outside, who are suspected of having links with terrorism, are kept there without any trial, or the option of one, and are routinely tortured to have them confess their crimes. US President-elect Barack Obama says closing the camp “in a responsible way” is one of his top priorities. He takes his oath of office on January 20, 2008. During his campaign, Obama has been vocal about his criticism of Guantanamo Bay, as well as the military trial process.

B Sumangal
If you ask anyone or check up in the encyclopaedia, who invented the radio or X-rays, chances are you will never come across the...
Planet Earth for Kids

Rama Kumaraswamy Thoopal
Most people all over the world travel by the road. In a city in Italy however, waterways make up the primary commuting routes. The...
5 Ws & H

Where Did Numerals Originate?

Bhaswati Ghosh
We deal with numbers all the time. Not just while doing math lessons at school, but also while counting money at the shop, memorising...
Stories for Kids

Benita Sen
It happened not very long ago. But when you're a snail, days move at snail's pace, too. So, if you were to ask our...