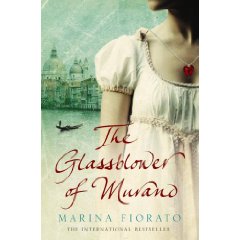 December 10, 2008 :Question: Name an impoverished British woman writer who wrote her first novel in sitting in cafes with her child, and went on to become a billionaire bestselling writer? J.K. Rowling, the writer of the Harry Potter series, comes to mind at once. Well, now there’s more.

Marina Fiorato, new bestselling writer, says she was inspired by J.K.Rowling to write her book in cafes, according to a news item in Forbes.com. The author, her husband and little son lived in a small one-bedroom apartment. She would sit in the café for hours at a time, writing and nursing a coffee. The method seems to have worked, all right.

Her novel, The Glassblower of Murano, has been translated into 14 languages, and the writer is about to sign a Hollywood deal. The book sold 40,000 copies in the U.K., and 150,000 copies in Germany.

Ms.Fiorato doesn’t like comparisons suggesting she is in the same league as the hugely successful Rowling. “We both have babies and we wrote in cafes,” she told Forbes.com.

J.K. Rowling was back in the news last week with the release of her new book – The Tales of Beedle the Bard, a book which helped Hermione, Harry and Ron to uncover the secret of the Deathly Hallows in the last novel in the series.

Ajay Dasgupta
Which is the most famous sheep in the world? A sheep called Dolly. But why is Dolly famous? That is because unlike other sheep's, Dolly...
Features for Kids

Gargi Pant
I am writing this as I am travelling in my time machine. I know how important it is to keep a diary of happenings....
Stories for Kids

Gargi Pant
Somu loved to read ghost stories. Every time he paid a visit to the library, he got back a teeth-chattering horror tale. It was...
Features for Kids

Sushama Shetty
Did you know that animals, birds, reptiles and humans learn the lessons of life through play? Any object can be used as a toy....
Features for Kids