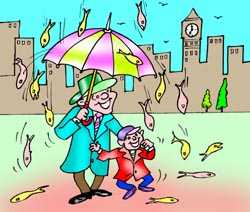 August 12: Last weekend saw some ‘fishy’ happenings across the world.

In Britain, for example, it rained fish.

It happened in Great Yarmouth, a fishing port in Norfolk. Residents found a shower of dead but still fresh fish called sprats raining down on them. “I thought at first I might have had something wrong with my eyes. The whole of my backyard seemed to be covered in little slivers,” said a resident to ‘The Times of India’, which carried a report.

What led to this ‘fish rain’? Believe it or not, it was a natural phenomenon. Being a port, Great Yarmouth is located right next to the sea. On Sunday a small tornado or storm hit the sea. It was the result of a thunderstorm that had hit the port all of a sudden.

The tornado caused strong winds to blow, which in turn caused big waves in the sea. Now waves only disturb the surface of the water in seas. Submarines for example, avoid being battered by even the severest storms by staying deep under the sea.

But several sea-organisms live close to the surface of the water. Sprats are among these. The tornado made the waves rise very high during which sprats and other organisms were pulled up with the water and thrown across with great force. They landed in the backyards of people’s homes at Great Yarmouth.

But while Great Yarmouth suffered a fish rain, just the opposite happened on the same day in Calcutta, the capital of India’s eastern state of West Bengal. All the fish vanished for some reason. This was partly because of rain, which poured on the city throughout the day.

It rained heavily in West Bengal’s neighbouring state of Orissa too, cutting off the supply of sea fish to the city. Another reason was because of a strike by the transporters of the state of Andhra Pradesh who carry the fish for long distances in their trucks.

Fish markets in Calcutta and its suburbs consume more than a million kg of fish everyday. About 90 per cent of it comes from Orissa and Andhra Pradesh – both states with large coastlines. So the prospect of spending a holiday without fish was unbearable to most Bengalis. A report in ‘The Telegraph’ described how tempers ran high as morning shoppers, braving the rain, searched in vain for their favourite fish. Prices of the few types of fish that were available, shot through the roof.

What would have happened if it had rained fish on Calcutta that day and Calcuttans were to find hilsa, rohu and other favourite fishes dropping on their backyards? Maybe the fish rain occurred in the wrong place!

Himalayas Have a Deep Impact on the Climate of the World

Ajay Dasgupta
Tibet is known as the roof of the world. That is because it is on a region which has the highest altitude in the...
Features for Kids

N.C. Rana
Since time immemorial, eclipses have been interpreted in various ways by different communities all over the world, reflecting many a time the working philosophy...
5 Ws & H

Rama Kumaraswamy Thoopal
A cool glass of water topped with huge chunks of ice is sure to quench your thirst on a hot summer day. But, before...
5 Ws & H

Rama Kumaraswamy Thoopal
As day breaks, a reddish-white ball of light that we call the sun, rises. This red haze gives way to a golden-white sheen as...
Biographies for Kids

Team Pitara
Thinker, statesman and nationalist leader, Mohandas Karamchand Gandhi not only led his own country to independence but also influenced political activists of many persuasions...