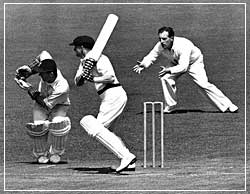 August 17: He is officially and unanimously known as the best cricketer of all times. Undoubtedly, he will find a place in any dream team. But who all would feature if Don Bradman created his own dream team? Well, among some of the towering giants of cricket, Indian hero, Sachin Tendulkar finds a pride of place in the Don’s ‘dream-11’ squad, according to a book ‘Bradman’s Best’ released in Sydney last week.

In the team, the legendary batsman placed himself at number three, followed by Tendulkar at four. Other greats who feature in the team include Dennis Lillee, considered the most devastating bowler by Bradman, Barry Richards, Gary Sobers and Don Tallon.

However, the choice of cricketers for the team enlisted in the book chronicled by Roland Perry, has started a controversy. Batting legend Sunil Gavaskar told The Hindustan Times that he refused to believe that the Bradman Dream XI was actually Sir Don’s personal selection for the world’s greatest ever combination.

Sports commentator V. Krishnaswamy agrees with Gavaskar. “Bradman was a man who always steered clear of controversies. I don’t think he would have named this team,” he told NewsJoy. And it is too much of a coincidence that the list should appear after Sir Don Bradman’s death, he added.

Gavaskar, who broke Bradman’s record of the player with the maximum number of Test centuries, was in Bradman’s shortlisted list of 69 from which the final team was selected, a Hindustan Times report said.

The Little Master pointed out that he was not involved with the chucking controversies that broke out in the 1960s and the 1990s.

B Sumangal
Plants kept inside a room always grow in the direction of the window. In woodlands where there is a thick canopy of trees and...
5 Ws & H

Ramendra Kumar
Mohanty ma'am was teaching the class five students of Arya Wonderland about similes. "As beautiful as?" she asked, looking at the students. "The rose, the Taj...
Short Stories for Kids

Meera Uberoi
The atom bomb was dropped on Hiroshima ten years ago. I lived a mile away from the city so nothing much happened to me,...
Features for Kids

Sushama Shetty
Did you know that animals, birds, reptiles and humans learn the lessons of life through play? Any object can be used as a toy....