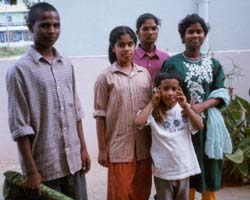 A school for dreamers? Teachers who help you build castles in the air?

But such a school does exist. Here children have their heads in the clouds, but their feet planted firmly on the ground.

Well, not quite planted. The mighty leaps into the air and well-aimed kicks during the ‘kalaripayittu’ class are the envy of any acrobat. (Kalaripayittu, an ancient martial art of Kerala, is the mother of all martial arts in the world).

The little room in Kodigehalli, a suburb of Bangalore reverberates with laughter as the students of a small experimental school called the Poorna Learning Centre, learn the basics of the art.

The three young teachers of ‘kalaripayittu’ are students of Kanavu, a school in Wyanad district of Kerala. These ‘teachers’ range in age from 12 to 18 years. They belong to a group which has collected in Bangalore to learn English, mathematics and other “basic” skills at Poorna. In a regular exchange programme, the students of Kanavu come to Bangalore and teach the skills they know to the children at Poorna.

Kanavu, where the children study, means ‘dream,’ in Tamil. The person with the dream is KJ Baby, a writer who also believes in action that would change people’s lives for the better. Baby won the 1994 Kerala Sahitya Akademi award for his novel ‘Mavelimantram’ (an ideal habitat).

The commune or common home run by Baby and his wife Shirley, is his experiment in a new way of living and education. He is perhaps trying to create the ideal community that his novel describes.

Most of the children in the school are from the Naikka and Paniya tribes of Wyanad district. Started in 1993 with about 30
children, Kanavu now has about 80 children who live in the ‘gurukulam’ or commune tradition, where students and teachers live and learn together.

The families of the students contribute with grains and a little cash if they are able to. The parents are mostly daily wage labourers on the pepper and cardamom plantations, jobless for a
better part of the year.

Donations from well-wishers have helped. But the members of Kanavu have tried to create their own funds by working in farms and by seeling the craft items they make in school. That’s how the dream has been kept alive for so long.

The children are divided into groups according to their age and
mental capabilities. Every child spends a few hours in the fields,
kitchen and tailoring room. Older students take up a subject of
their interest, learn it and share it amongst themselves.

Students are also encouraged to prepare for the open-school examination for the class tenth exams, which would equip them to enter the formal education system if they wish to.

But all-round development is stressed over book learning. Eminent
poets, writers, educationists, musicians and experts from various
fields in Kerala and from other parts of the country visit Kanavu
from time to time, stay with the children and teach them hundreds of things.

In addition, elders from the tribes too come and stay with the
children teaching them traditional skills, tribal rituals, stories
and songs. The children are encouraged to be in close contact with the land, the forests, birds and animals. Certain skills that are passed down from generation to generation in the community, are taught to them. These include making handicrafts, pottery, painting and bamboo work.

The focus is on learning through living. “We cultivate the fields around our
home and study the crops, plants, birds and fish in the river,”
says Meena, a student at Kanavu shyly.

Most of the students are drop-outs from regular schools, which do not fit into the way they live. At Kanavu, there is no attempt made to make them forget that they are tribals, so they have a sense of pride in who they are. They also value the wisdom handed down from generation to generation.

The tribal languages and folklore of Wyanad have found new life
through Baby’s efforts. The children are natural musicians,
picking up songs and art forms with ease. Their music is also a way
of collecting donations for the school. The folk song troupe
travels all over Kerala singing songs they have composed and set to
music. The songs are lyrical tales about their lives, their loves,
their pain and laughter.

As Leela plays the tabla with passion, the rest of the troupe
breaks into song – a song about their home, their land – Wyanad.
They describe the rich earth, the breeze, the gurgling rivers and
forests teeming with animals and birds. The beautiful relationship
of the tribals with nature is described and is more effective than
any lecture on ecology could ever be!

And that’s what Kanavu or the dream is: that these children should not feel inferior to the higher castes or be exploited by them merely because they are seen as poor and backward tribals. At Kanavu, they are being offered the opportunity to make their own futures.

Sanyukta Chaudhuri
Poltu was wide awake in his bed. He had had a marvellous dream in which he had won the football match in the inter-school...
5 Ws & H

Ritu Asthana
As a child I was always full of questions. I remember asking my parents why zebras were striped or why did giraffes have such...
Planet Earth for Kids

Ashok K Vaish
Through the long and dark Arctic winter, the mother Polar Bear sat quietly in her den. She had given birth to her cubs, and...
Biographies for Kids

Manisha Deveshvar
It is the month of Ramadan (Ramzan) in the Islamic calendar and, for those who believe in it, each day of the month follows...