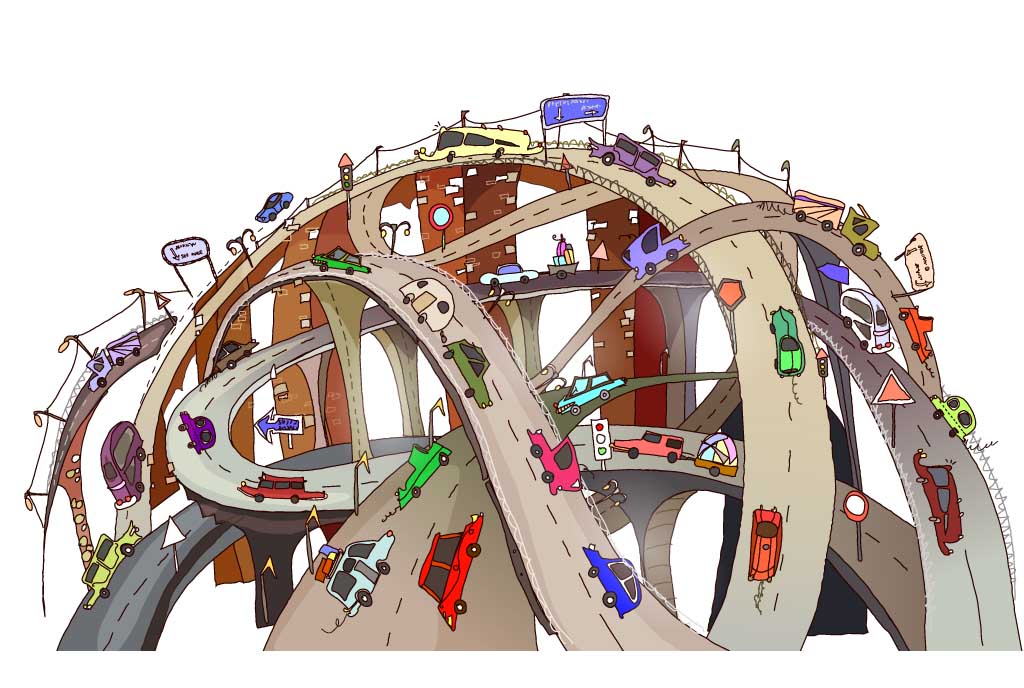 The road on which I travel to and from office every day is one of the busiest roads linking the Indian capital, Delhi, to its neighbouring state, Haryana. It is barely 11 feet wide for the last couple of kilometres before it snakes across to the neighbours. And it is on this stretch that you have a war every morning and evening.

It is a war of space and speed – between cycles, scooters, auto-rickshaws, cars, lorries, tractors, buses and huge trucks. Though, thankfully, the last mentioned bullies – the trucks – have been banned from the road during the daytime.

It is a fantastic scene. The cyclist wobbles on one side of the road, swayed by the slightest wind or mischievous nudge of a brash scooterist, who insists on sitting crookedly on his seat.

A battered old car wheezing asthmatically winces as an impudent new foreign-made car, rushes past it (It looks more like a sports shoe with a huge sole!) The auto-rickshaws have a terrible habit of zig-zagging through the traffic, like nasty wasps. They are a menace to humanity at large.

The tractors trundle at a leisurely pace as if they are sowing tar on the road. They often have huge carts attached to them. These carts are weighed down with bales of straw.

As for the bus drivers, they go on majestically. They do not care who they are likely to mow down – on the sides, at the rear, or in front. They know they are the biggest vehicles on the road and thus, own 99.9 per cent of the road.

Seeing who is ahead and who is not, who is bratty and who is not, is a favourite pastime of mine. That it is someone else’s daily routine as well is something that I discovered a few days ago. Lord Shiva, the destroyer of evil and one among the three important gods of the Hindu universe, also likes looking at the chaos on the road.

He sits on a metal stool at one of the busiest intersections, both legs comfortably tucked under his knees. One arm is raised in blessing – each passing vehicle gets a bit of his good wishes.

Shiva’s body is blue, a reminder of the time when without a twitch he drank poison that came out of the churning of the ocean during a conflict between the devas and the asuras. The moon and the river Ganga nestle in his long tresses.

On his face is a calm smile, as if knowing that to look dangerously destructive on a busy road is inviting disaster. Even the traffic policemen at a nearby watching post are relaxed – they know lord Shiva is there.

This Shiva is made of plaster. He is a statue – a life-size statue that has been sitting in open air just outside an artisan’s shop, waiting to be sold and carried away in one of the many kinds of transport that he supervises day in and day out. On two stools flanking him on either side, are a deer and a sleepy dog. They, too, await their future owners.

For a long time, the artisan had been making the popular white plaster of Paris busts of Greek goddesses without arms that can be seen in many homes in Delhi. Then people got tired of her, so he started making roly-poly images of Ganesha, the god of good luck and incidentally, Shiva’s son.

That worked for a while and then the popularity graph dipped. For a while the artisan made stern looking busts of Sardar Patel, prominent freedom fighter and as the first Home Minister of free India, known as the man with the iron hand. Sardar Patel did not look too happy placed alongside the alluring Greek goddess, and was duly removed.

And then, a few days ago I saw lord Shiva’s majestic statue on the roadside. Maybe the artisan feels that the god will drink all the poison in his life, and make it worthwhile.

Last night, as I wound my way back home late at night I saw Shiva sitting in solitary splendour. He was bathed in silvery moonlight, looking at the monstrous trucks that roared past. He looked as if he liked it there, despite the petrol and diesel fumes. I may be mistaken, but I thought I glimpsed a secretive smile on his face. I think he is not going anywhere.

How Do Fish Survive in Icy Waters?

B Sumangal
In cold winter months, lakes and rivers freeze over forming ice. Yet, fish and other aquatic animals manage to survive. Animals like seals, penguins, walruses...
5 Ws & H

B Sumangal
Would you doubt my word if I say that Doubting Thomas, one of the Apostles of Christ visited India and established Christianity? Don't. For...
Planet Earth for Kids

Ashok K Vaish
Through the long and dark Arctic winter, the mother Polar Bear sat quietly in her den. She had given birth to her cubs, and...
5 Ws & H

Rama Kumaraswamy Thoopal
A cool glass of water topped with huge chunks of ice is sure to quench your thirst on a hot summer day. But, before...
Festivals for Kids