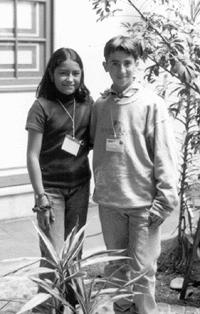 July 29: Ivan Vargas is only 14. But he is a messenger of peace for his country, Colombia. He and 100,000 other Colombian children have got together to start the Movement of Children for Peace. All of them want only one thing today – peace in their war-torn country — at any cost. But not having much faith in adults, they have decided to bring it about themselves. And for their efforts, the children’s movement was even nominated for the Nobel Peace Prize of 1999.

“The conflicts in Colombia have been caused by adults, and the children can help by participating in the programmes of the Children’s Movement for Peace, or by making the topic of peace an important part of their studies in school….” explains Ivan (see picture below right).

But why have the children thought it important to start a movement for peace in Colombia?

They haven’t had any for the last 35 years, that’s why. All these years there have been violent fights between troops of military governments, guerrillas or groups of people opposed to them. The guerilla groups like to take their opponents by surprise. They strike secretly and operate from remote places and forests where it’s easy to hide.

Generations of children have been very badly affected. Many of them have been forced to join one guerrilla group or the other, to fight. They are made to do the most dangerous things like laying mines, carrying messages, spying, buying supplies or carrying backpacks. Often they are as young as 10 and 12. A government report of 1996 had shown that there were between seven and 10 child soldiers in a batch of 100, of a guerrilla group.

The destruction caused by the internal war has also forced many children to leave their homes. It has left others orphans.

Even the cities are steeped in violence. Not surprisingly, the children, too, have shown a tendency for violence. Many children have said that their school partners were the most violent people they knew.

The situation is thus, really bad. The children can’t play, miss school often, can’t trust other kids their age. Many of them have even taken to selling drugs to earn money. Colombia is notorious for its drug lords or the powerful criminals who run the drug trade.

Which is why the children are fed up. Some time ago the United Nations Children’s Fund ( UNICEF ) conducted an opinion poll by asking a large number of children what they missed the most due to war. Most of the children said that the war was depriving them of their right to peace. Around 2,700,000 children voted for peace as the most important of their rights.

For they knew that only peace can give them a happy, carefree and joyous childhood, and not force them to become violent adults at a young age.

Today, this has expanded to a campaign called the National Children’s Mandate for Peace. The Mandate is a type of formal order informing people that they have to honour the 12 rights of their children.

The other rights include the right to life, education, love of the family, good treatment and protection from being exploited.

In late 1996, a delegation of 100 children traveled to the Colombian capital Bogota. They placed their peace charter before the elected representatives of the legislature (like our members of Parliament). The children want these rights to become laws so that people depriving the children of their rights can be punished. They have one mission in their life today – to popularise the rights of children among children and adults throughout Colombia.

The determination of the children has had an effect on the adults. During the national elections in 1997, 10 million of them voted that children should not be allowed to fight in wars. It is not surprising that personalities like Nobel Peace Prize Awardee, Rigoberta Menchu, are lauding the efforts of the young Colombian peacemakers.
(Women’s Feature Service)

Ajay Dasgupta
The sun is a star, just like the thousands of others we see in the sky each night. But it looks so very big....
5 Ws & H

B Sumangal
Among birds, pigeons have a natural and unerring instinct of returning to their nests or homes after long flights. In the early days besides...
5 Ws & H

Ritu Asthana
As a child I was always full of questions. I remember asking my parents why zebras were striped or why did giraffes have such...
Planet Earth for Kids

Bindu Mishra
Come monsoons, and we immediately think about the beautiful peacock, dancing in the rain, with its luscious tail spread out behind it. Undoubtedly one...