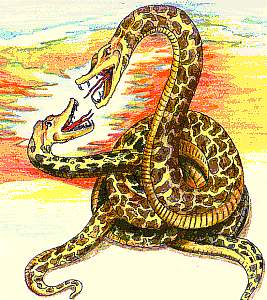 You might have seen the recent English film Anaconda, where these snakes are shown as giant man-eating monsters. Well, that’s not all that can be said about these mighty creatures. Eating is but necessary for survival — and you never know, Anacondas might eat humans too, if one goes near them! But apart from their strange eating habits, these snakes are amazing in a lot of other ways too.

The Anaconda (Eunectes murinus) is a semi-aquatic snake found in Central America and mostly in tropical South America. It belongs to the Boa family, Boidae, and is dark green in colour with round black markings. A smaller species is the Yellow Anaconda (E. notaeus), which is yellowish green with irregular dark blotches. Not only does it have a bright looking skin with a distinct colour pattern, but also it is also BIG, I mean, really LOOOO……NG! It may reach a length of even 25 feet – which is roughly four times a reasonably tall adult human being! (Pythons, however, are much longer, and have been recorded to be of even 33 feet!)

And what’s more, the Giant Anaconda or Water Boa may live upto even 50 years – which is more than what most animals do!

With all that, would you believe that the Anaconda is not venomous? In fact, less than one-third of the 2,500 to 3,000 snake species known are poisonous and even fewer than 300 species may be fatal to humans. But sadly, snakes have, almost always, an ominous presence in the minds of people as dark and deadly poisonous creatures, which is created and perpetuated by myths, folklore, books, films, etc. Quite on the contrary, if you actually happen to come by a snake, in all probability it will be more scared of you than you will be of it! And it would not harm you if you don’t harm it either.

But, our handsome friend here, the Anaconda, is quite different from other snakes. It kills by constriction, that is, it wraps itself strongly around its prey, squeezing and suffocating the animal to death. And then it swallows its meal whole! And sometimes it might take even several weeks to digest a single prey! Oh, what a lazy and gluttonous animal it is! Anacondas can swallow animals as big as full-grown deer.

The Anaconda can glide smoothly and easily in water just like a submarine. Its eyes and nostrils are strategically placed on its small flat head, which peer above the surface of the water like a periscope. This allows the animal to ambush its prey, for example an unsuspecting water bird, without chasing it.

The mating habits of Anacondas are rather interesting. Many males may fight among themselves to mate with a single female! Researchers have seen as many as 13 male anacondas writhe and wriggle in such a fight, which looks more like a slow-motion wrestling match that lasts for several weeks! The female and male are different in appearance – for the female is five times bulkier than the male! This difference in size between the sexes is much greater in Anacondas than in any other animal.

Most snakes lay eggs which then hatch after a period of time to bring forth the young. The Anaconda’s eggs, on the other hand, hatch just before laying, and the mother Anaconda gives birth to several baby Anacondas. Sometimes, a clutch (the place where the young snakes are born) may have more than 70 newborns! With such a large brood, Mama Anaconda might be feeling rather proud! Researchers are uncertain, though, whether a single male or more father the offspring.

But Nature sure has its own way of maintaining the ecological balance, for about half the young Anacondas are eaten by predators like caimans, etc. within the first year itself, and only few remain alive to grow up into big and strong adults. This is necessary, otherwise the Anaconda population would have increased at a very alarming rate. And you can imagine what would have happened if the predating animals didn’t eat the baby Anacondas. There might have been so many Anacondas in the world that they would have been everywhere — out on the streets and in our homes!

Rama Kumaraswamy Thoopal
Oil spills can have a devastating effect on marine life. After an oil spill, one of the most important jobs of rescuers is to...
Features for Kids

Woodpecker
The Greeks were a passionately curious lot. When Alexander the Great set off in 334 BC on the famous expedition that took him over...
5 Ws & H

How Do Fish Survive in Icy Waters?

B Sumangal
In cold winter months, lakes and rivers freeze over forming ice. Yet, fish and other aquatic animals manage to survive. Animals like seals, penguins, walruses...
Stories for Kids

Benita Sen
It happened not very long ago. But when you're a snail, days move at snail's pace, too. So, if you were to ask our...
Features for Kids

Chitra Padmanabhan
When I was in the fourth standard, I got my first real diary as a present from a cousin. It made me feel very...