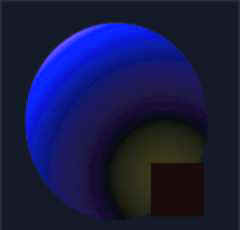 Named after the father of the Titans in Greek mythology, Uranus is the seventh planet in the solar system. It was first observed through a telescope by Sir William Herschel on March 13, 1781. Although Herschel wished to call the newly discovered planet Georgium Sidus (Georgian Star) for King George III of England, Johann Bode’s proposal of the name Uranus gained more acceptance over the years and finally became universal in the mid-19th century.

The Uranian realm is a dark kingdom, so remote from the sun that daylight there approximates a total solar eclipse on Earth. Such distance from the sun also makes Uranus unimaginably cold. Sample this: The temperature in Uranus would be minus 250 C (-346F) i.e. if a space traveler were to stick his hand out in that environment he would find it instantly freeze-dried.

This frigid planet is also seeped in mystery. For one thing, no one has yet determined how fast the planet rotates and thus how long its day is. For another, Uranus lies tipped on its side. Astronomers can only guess what knocked it over; most suspect that an Earth-size object crashed into the planet in its infancy. And like the Saturn, Uranus too has rings, nine narrow bands. But they are coal black and were not even detected until 1977. What are they made of?

In Voyager 2 photos, Uranus appears as a bluish featureless disk, except for considerable darkening toward the edges. Faint banding is seen in contrast-enhanced images.

Uranus’s average distance from the Sun is 2.875 billion km and the planet takes 84.013 years to make one complete revolution about the Sun. Its period of rotation was determined by Voyager 2 to be 17.24 hours. One startling aspect of Uranus revealed by the Voyager is that its rotation axis is inclined from its orbital plane. This means that the poles of Uranus lie nearly in the plane of its orbit around the Sun. Uranus has an equatorial diameter of 51,100 km, almost four times that of the Earth, and a mass 14.58 times that of the Earth.

The dark absorption bands discovered in 1869 in the red part of the spectrum of Uranus were identified in 1932 as being caused by methane gas in Uranus’s atmosphere. This red absorption is the major cause of the blue green colour of the planet. The methane absorbs much of the red light from the white sunlight, leaving a bluish green colour in the reflected sunlight. Measurements by Voyager 2 verified that hydrogen is the main constituent of the visible atmosphere. Helium is the other major constituent, about 15% in terms of molecular weight, which is a larger percentage than in the atmospheres of either Jupiter or Saturn. Together hydrogen and helium make up more than 99% of Uranus’s atmosphere, which extends to a depth of about 8,000 km. Voyager 2 also detected a layer of methane ice clouds near a pressure level of about one atmosphere.

Deep within Uranus there exists a superheated water ocean, perhaps 10,000 km deep, which contains large concentrations of ionized chemicals. It is in this ocean that Uranus’s magnetic field may originate. Beneath this ionic ocean an Earth-size core of molten rocky materials has been thought to exist. Further analysis of data has suggested that the core may instead be a highly compressed liquid.

Unlike the other giant planets, there is no evidence of any significant internal heat source. A very extended corona of atomic and molecular hydrogen encompasses all the known rings of the planet, perhaps heated by low-energy electrons. Sunlight falling on this corona causes it to radiate ultraviolet light, a phenomenon that scientists have termed electroglow.

The discovery on Mar. 10, 1977, that Uranus has rings was one of the most unexpected and exciting events of modern planetary astronomy. Subsequent observations have indicated the presence of ten narrow rings of dark particles and one broad, diffuse ring, in addition to 100 or more possibly transient ringlets of dust-size particles seen only in Voyager 2 images of the backlighted rings.

Uranus has five known moons namely Titania, Oberon, Umbriel, Ariel and Miranda. Four of these moons bear Shakespearean names. Umbriel derives its name from Alexander Pope. Miranda was discovered by Gerard Kuiper in 1948. It is the innermost and smallest of the major moons. Its surface consists of an old, heavily cratered, rolling terrain with relatively uniform reflectivity. It also consists of a younger, complex terrain in three nearly rectangular regions characterised by parallel grooves, vertical structures, and large brightness differences. The materials out of which Miranda was formed may not have melded together to form a uniform surface. There are grand canyons as deep as 20 kilometres. Its present bizarre appearance may be a frozen record of the late stages of the development of this satellite.

Ariel and Umbriel was discovered by William Lassell in 1851. Although Umbriel and Ariel have similar diameters and densities, they differ dramatically in the appearance of their surfaces. Ariel’s surface is literally covered with fractures and fault systems. It shows a crust full of valleys. Glaciers appeared to have flowed through these floors. Far darker than its four siblings, Umbriel seems to be peppered with old craters 50 to 100 kilometres across. It also has the fewest geological features.

Titania and Oberon, discovered by William Herschel in 1787. Oberon and Titania are remarkably similar in size, density colour, and reflectivity. Titania, however, has a much larger fraction of small craters and more fractures across its surface. This implies that Titania has a geologically younger surface. Oberon has one mountain that rises to an altitude of at least 20 km above the surrounding surface.

Ten small satellites were also discovered in Voyager 2 photographs, all of them orbiting Uranus well inside the orbit of Miranda. The five major satellites and probably the ten smaller ones as well appear to be in synchronous rotation. That is, they keep their same faces toward Uranus as they orbit the planet. Much like the ring particles, the smaller satellites also appear to have surfaces as dark as coal.

Bindu Mishra
Come monsoons, and we immediately think about the beautiful peacock, dancing in the rain, with its luscious tail spread out behind it. Undoubtedly one...
5 Ws & H

How do Satellites Stay Up?

Jim Nicholls
Satellites orbit the earth because of the force of gravity. To understand why this happens and why the satellite does not get pulled in...
5 Ws & H

Ritu Asthana
One of the earliest memories I have as a child is when I was approximately three or four years old. I remember watching my...
5 Ws & H

Ritu Asthana
As a child I was always full of questions. I remember asking my parents why zebras were striped or why did giraffes have such...