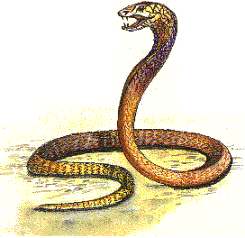 Belonging to the family Elapidae, the name Cobra is popularly applied to African and Asian snakes that are capable of spreading long ribs in their necks into a hood when threatened. There are six species of cobras: the Naja, the south African ringhal (Hemachatus), king cobra (Ophiophagus), water cobra (Boulengerina), tree cobra (Pseudohaje), and shield-nose cobra (Aspidelaps).

The king cobra or Hamadryad holds a record length of 5.58 m (18.3ft) for a venomous snake.

It has a head as big as a man’s hand and can stand tall enough to look you straight in the eye. The hood plays a big part in its fearsome ‘threat posture’. The king cobra can stand up to one third of its total length or from 3 to 6 ft height and has the ability to move forward in the intimidating posture. An upright posture without the hood extended is normally a friendly gesture and the snake often assumes this pose to see over bushes or tall grasses.

Its deadly fangs are almost half-an-inch long. And the venom could stun your nervous system and stop your breathing. If the venom comes in contact with the human eyes, it can cause an immediate and severe irritation of the conjunctiva and cornea that, if untreated, could result in permanent blindness. Incidentally, the king’s venom is actually less lethal than a common cobra’s. However, the king makes up for it by delivering more venom per bite as much as 7 millimetres of liquid — which is enough to kill an elephant or 20 people.

Despite being colour blind, the King cobra’s eyesight is better than most snakes. It can see a moving person almost 330 ft away.

King cobras actually do hear thereby debunking the common misconception that snakes are audibly challenged due to the absence of external ears. Sound travels from the skin to the jaw muscle to the quadrate bone next to the ear bone. From there, sound waves pass on to the inner ear. Nevertheless, the responses to a snake charmer’s flute are due to visual cues.

The King cobra’s hissing sounds more like a dog’s growl and is much lower than most snakes. The hiss is produced by tiny holes in the trachea, which is resonated by the lung.

They are cannibals. Besides eating non-venomous snakes like the rat snakes, they also dine on venomous Indian cobras, kraits and even small King cobras.

With no cutting teeth they gulp down every meal. The cobra’s digestive tract is like a long straight tube. Blunt teeth puncture the food and the venom’s enzymes start the digestive process. From the long stomach, food travels through the small intestine, the large intestine and then out of the cloaca.

Snakes generally shed their skin when they grow too big for the old skin in a process called ecdysis. A King cobra sheds 4 to 6 times a year in a two-week shedding cycle. However, in the first year they shed every month. During the shedding time, the king drinks a lot of water to help separate the itchy old skin from the new one underneath. It then rubs against the rough edges to start the peeling process. Besides the new skin, the King uncovers new fangs, teeth and tongue.

A King cobra’s colour varies from olive brown to grey to deep shiny black depending upon the habitat. Despite its aggressive reputation, the King cobra is actually more cautious than many smaller snakes. It only attacks people when it is cornered or in self-defence or to protect its eggs. They appear to be much more intelligent than other cobras.

About 2 months after mating, the queen lays a clutch of 20-40 eggs. She will guard these for about 2 more months. The King cobras are the only snakes that make nests for their eggs. The nest consists of mounds of leaves and debris that the queen whips together. Just before the babies emerge, the mother leaves. When they hatch, the brightly marked hatchlings are raring to go. About 14 inches long and as thick as your little finger, they emerge self-sufficient. Their venom is as potent as an adult King cobra.

King cobras are usually found in India, Vietnam, southern China, Philippines, Malaysia and Indonesia. One of King cobra’s natural habitats is the cool undergrowth of rain forests. It stays near streams where temperature and humidity are relatively constant. However deforestation, often due to growing populations and agriculture, is shrinking the King’s native habitat.

Hindus consider cobras as manifestation of Lord Shiva — god of destruction and regeneration. Besides, its aggressive reputation and its lethal defences have inspired people to view its powers as god-like. In India, since time immemorial, people have revered King cobras and placed them at the center of their most scared rites.

Sushama Shetty
Did you know that animals, birds, reptiles and humans learn the lessons of life through play? Any object can be used as a toy....
Stories for Kids

Thelma J. Talloo
Kalu was the only son of a farmer and his wife. "I wish I had a brother or a sister, to play with," he told...
Features for Kids

Saakshi Khanna
A routine college day. We had to go for textile practicals after lunch. Going for any class post lunch was a pain. All we...
Poems for Kids

Flower on the Road

Chitra Padmanabhan
Spring has come, said the bougainvillea Crimson, orange, cream and yellow Making a flower wall along the road I bring happiness to all. Wait, said the little flower on the edge of the kerb I,...
Festivals for Kids