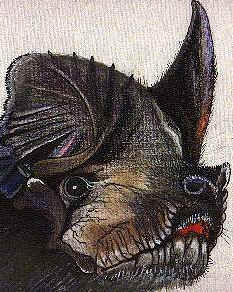 Bats are among the world’s least appreciated and most endangered animals, thanks to centuries of myth and superstition. Contrary to common misconceptions, bats are not blind, they are not rodents and they won’t get tangled in your hair. The truth is that bats are mong the most gentle and beneficial animals on earth.

A bat is a winged mammal with the ability to fly. It’s ability to maintain sustained flight, unique among mammals, results from the modification of hand-like forelimbs into wings. Bats are mammals just like humans which means all bats are warm blooded, have hair, bear young ones and nurse them.

All bats can see but some use special sonar system called echolocation. These bats make high frequency calls either out of their mouths or noses and then listen for echoes to bounce from the objects in front of them. They’re able to form pictures in their brains by listening to the reflected sounds. In this way, bats are able to comfortably move around at night, avoiding predators, locating their food and capturing insects in total darkness.

Bats belong to the order Chiroptera and are divided into two suborders: the Megachiroptera (megabats) and the Microchiroptera (microbats). Microbats detect their prey using echolocation while most megabats cannot echolocate but have highly developed eyesight.

Starting out as insect eaters, there are now bats that live on fruit, fish, nectar, blood, rodents, frogs, and even other bats. With this great variability in their way of life, bats have become the second largest mammalian order and are now spread over most of globe.

Nearly 70% of the 950 species of bats feed mainly on insects. Others eat fruit, nectar, and pollen; a few eat blood, fish, or other mammals. Fruit eaters or frugivorous bats living in tropical climates have very good eyesight and sense of smell for finding ripe fruit to eat. The nectar and pollen feeders are found in desert areas. Carnivorous bats living in India, Southeast Asia, Australia and South America, have sharp claws and teeth for catching small vertebrates like fish, birds, small mammals and reptiles. A few Latin American bats called vampire bats eat only blood.

Vampire bats do not actually suck blood. They lap it up like a dog drinking water. They use their sharp, highly modified teeth to make a shallow wound and secrete an anticoagulant in their saliva to inhibit clotting of the blood. The vampire’s bite is painful but not usually dangerous, though the saliva may transmit certain diseases.

Bats are nocturnal or active at twilight and hence natural enemies of night flying insects. A single bat can catch 200 mosquito-sized insects in one hour.

Unlike other animals, a bat’s body is best adapted for hanging upside down. Bats actually have specialised tendons that cling to their roosts without expending any energy. Hanging upside down also provide bats with roosting space away from predators in safe places in trees and building that few other animals can use.

Bats have low rates of reproduction. Most species produce one or two pups in a litter. Some species that hibernate have unusual reproductive cycles. Mating takes place in autumn, and the females store sperm in their reproductive tracts during winter. Ovulation and fertilisation occur in spring. The gestation period for most of these species is about 40-70 days and for some up to 100 days. In the vampire bat the gestation could be as much as 8 months.

The new-born bats are large and are nursed from pectoral mammary glands by their mothers. Some young bats first fly at about the age of three weeks, a time when their milk teeth are replaced by permanent teeth.

There is no place like home for bats. They spend half their lives in roost, where they rest, mate, tend their young, and hibernate. Bats have always lived in extraordinary places. Trees and caves are their favourite haunts, but they are also found in foliage, crevices in rocks, in spaces under the bark of trees, termite hills and cliffs. Some make tents out of the leaves, some roost in the hollow stems of bamboos. Species that roost in caves and trees often form huge colonies. Over the years bats have found alternative homes in buildings.

However human activities are encroaching on bat’s space. Caves have been disturbed by mining and cave exploration activities. Trees are being cut and cleared. The loss of habitat has taken its toll on the nocturnal creatures. World-wide there are now fewer than 1,000 species.

Mortality among bats is usually accidental or is associated with human activity. Some temperate species are remarkably long-lived; little brown bats have been recorded as living for 30 years, but 10 years is probably more common in that species.

Bats are very beneficial to earth. Tropical bats are key elements in rain forest ecosystems, which rely on them to pollinate flowers and disperse seeds for countless bees and shrubs. Bat droppings in caves support whole ecosystems of unique organisms including bacteria useful in detoxifying wastes, improving detergents and producing antibiotics.

Vampire bats adopt orphans and have been known to risk their lives to share food with less fortunate roost-mates.

Bumblebee bat is the world’s smallest mammal. It’s found in Thailand and weighs less than a penny.

Giant flying foxes found in Indonesia have wingspans of nearly 6 feet. They are called flying foxes because their faces resemble those of little foxes.

The Honduran white bat is pure white in colour and has yellow nose and ears. It cuts large leaves to make tents that protect its small colonies from jungle rains.

Brishti Bandyopadhyay
Amelia Earhart was one of the world's most celebrated aviators. She broke records and charted new skies in the course of her short life....
5 Ws & H

B Sumangal
In 52 A.D. Thomas Didaemus, one of the 12 apostles of Jesus Christ is believed to have landed at Musiris (Cranganore) in Kerala. He...
Features for Kids

Chitra Padmanabhan
When I was in the fourth standard, I got my first real diary as a present from a cousin. It made me feel very...
Stories for Kids

Go For It, Bablu!

Chitra Padmanabhan
It happened on the day school started after a heavenly two months of summer holidays. Shankar refused to wake up at 6 am. He...
Features for Kids

Brishti Bandyopadhyay
A lush green forest in the middle of a rocky wasteland. No, this paradise is not an illusion. Abdul Kareem has created it with...