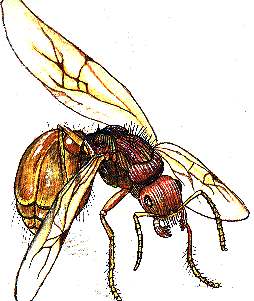 It is believed that ants evolved from wasps and have lived in the Earth for at least 100 million years. It is said that at any one time there are at least 1 quadrillion living ants on the Earth.

Ants are no doubt the most successful of all social insects of Hymenoptera, an order that also includes wasps and bees. Ants are colony makers and their colonies may contain from a few to 20 million individuals. The ant family contains more than 4,500 described species that can be found in tropical or temperate areas of the world.

The hallmark of ants is their highly advanced social behaviour. All species of ants are social, while their cousins, some of the bees and many wasps, still lead single lives. Ant societies can have a million or more members, each rigidly programmed to behave in the best interests of its members. They are remarkably adaptive and are found almost anywhere.

The colonies are female societies. The queen lays unfertilised or male eggs as needed. The sole job of the drones when they mature is to mate for a few moments with a young queen. When new males and queens emerge from a colony, they usually engage in a nuptial flight, during which fertilisation occurs. The male dies soon after the flight. The female drops to the ground, sheds her wings, and is adopted by an existing colony or buries herself in a cavity, where she founds a new colony.

All worker ants are female. So basically the ant world is a mother and daughter universe.

An ant colony resembles an extended family. Its members all have a common mother, the queen and often the same father, one of the drones with which the queen mated. And the members of an ant colony are even more closely bonded than a human family. The sisters in an ant colony share an average of 75 percent of their genes as compared to human siblings who share only 50 percent.

The colony has one goal: to ensure the reproduction and survival of its common genes. The brood or eggs therefore becomes the nucleus of the colony. All the cooperative actions associated with ants – food gathering, colony defence, brood tending, nest construction – center on rearing the next generation.

This demands not only cooperation but also sacrifice. The female worker ants sacrifice their own fertility because it is more efficient to help raise the eggs of a single, continually laying queen than to lay and rear their own eggs. Likewise soldier ants automatically risk their own lives to defend a territory needed to feed their colony’s brood.

The colonies also show a division of labour. There are queens, drones, huntresses and brood-tending workers. The queen, who is usually winged, produce a large number of eggs which are fed and cared for by the workers. The other females who are wingless, non-reproductive workers perform the life-maintaining tasks of the colony. In some colonies there are subcastes among worker ants. The division here is correlated with size. Small workers tend the brood or larvae and the larger workers hunt for food. Guard ants at the entrance discriminate nestmates from strangers. They will defend the nest to death if invaded. The drones are produced from unfertilised eggs and serve only to fertilise the queen.

The way ants communicate is also very interesting. Without voice or ear, an ant sends perhaps 50 messages through body language and pheromones. Ants are in fact little chemical factories, continuously producing an array of substances called pheromones, that serves as the ant’s language. Through these pheromones the ants can convey messages ranging from the location of food to the presence of danger. They use pheromones to orchestrate social behaviour as diverse as tending the young, grooming the queen, marking their territory, mating and laying trails. They also interact through oral exchange of food called trophallaxis, a behaviour pattern of critical importance to social organisation in ants.

An ant’s life cycle includes egg, larva, pupa and adult.
Whether an egg will develop into a worker or queen depends mainly on the amount and kind of food fed to the larvae.

Ants usually live in nests excavated in the soil or wood or in a variety of natural cavities. Some ants called army ants form temporary nests that consist entirely of the ants themselves, suspended from one another and a supporting object. The nest is a living ball or cylinder of ants. In this cluster the queen and brood are enclosed. After nesting phase, the nomadic phase starts.

The whole colony moves with the queen and the brood and are protected by the huge soldiers who will kill everything that come into their way. The African weaver ants make their nest of living leaves held in place by larval silk.

Ants are generally omnivorous but some need special food. Fungus growing ants cut leaves and bring them to their nest to fertilise the fungus gardens they built. These ants are herbivorous and survive on fungus. In some species like the Atta or leaf cutter ants, the queen lays special non-fertilised eggs which will be consumed by the ants in the absence of food.

The harvester ants frequently visit grass fields to harvest and store the grass seeds. They live in arid environments and survive almost totally on seeds. Specialised workers crack the seeds for the other ants to eat. Some ants like the gatherers or the herders feed on plant juices.

Some ants are temporary or permanent parasites in colonies of other ant species. The Amazon ants attack other ants and bring back unconsumed brood to serve as slaves as soon as they’ve matured.

Rama Kumaraswamy Thoopal
A cool glass of water topped with huge chunks of ice is sure to quench your thirst on a hot summer day. But, before...
Features for Kids

Summer music of the trees

Chitra Padmanabhan
I always used to think that the drive across a four kilometre stretch from my house to the main road was a pain. Actually,...
Biographies for Kids

Team Pitara
Thinker, statesman and nationalist leader, Mohandas Karamchand Gandhi not only led his own country to independence but also influenced political activists of many persuasions...
Features for Kids

Chitra Padmanabhan
When I was in the fourth standard, I got my first real diary as a present from a cousin. It made me feel very...
Stories for Kids

Thelma J. Talloo
Kalu was the only son of a farmer and his wife. "I wish I had a brother or a sister, to play with," he told...