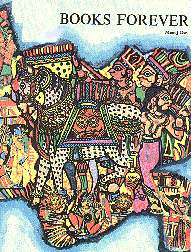 India’s literary past is indeed great. It’s a known fact that many of the parables of the Bible, the fables of Aesop of Greece, the folktales collected by the Grimm brothers of Germany and the tales retold by Hans Andersen of Denmark had their origin in India.

We shall unravel together some of the gems of Indian literature like the Bhagavad Gita,The Upanishads, Vedas, Ramayana, and the Mahabharata in our subsequent articles. In the first article we talk about the permanence of books .

Excerpts from the book:

About two thousand years ago there lived a Chinese emperor Hsi Hwang Ti. He was very angry with his subjects for a strange reason. They read a great deal and those who could not read, listened to those who could. Now Hsi Hwang Ti could not be sure that all the books written — history, philosophy and fiction sang only his glory or that of his ancestors. And who knew there might be authors who had even dared to criticise the Emperor himself!

In any case, thought Hsi Hwang Ti, the people had no business to read and bother about things that did not concern them. They ought to work hard, be loyal and pay their taxes. Only thus could peace be maintained.

So he ordered that all books be destroyed. Books in those days were blocks of wood with words carved on them. They were not easy to hide. The emperor’s men combed the empire going from town to town, making bonfires of all the books they could lay their hands on. That was the time when the Great Wall of China was being constructed. Many books huge round logs — were rolled into the wall and used instead of stones. Sometimes scholars, who refused to part with their books, were buried with them in the gigantic wall!

The years passed. The emperor died. A few years after his death, almost all the books which were believed to have been destroyed, reappeared written on new polished blocks. Among them were the works of Confucius, the great philosopher, which are read by people all over the world to this day.

This is not the only instance of an attempt to destroy books.

When the University of Nalanda was at the height of its glory in the seventh century, Hiuen Tsang, the famous Chinese traveler and scholar who was studying there at that time, dreamt one night that all the beautiful buildings in the university had disappeared. The place was full of buffaloes instead of teachers and students. The dream uncannily almost proved true when three sections of the large library of the university were burnt down by invaders.

A similar incident also occurred in the ancient city of Alexandria. The city boasted of a great library, which contained manuscripts collected from several countries. People from all parts of the world including India went to study there. However this invaluable library was deliberately burnt down in the seventh century.

The invader who destroyed it justified his actions with a strange argument. He argued that if the books did not say what the sacred book of his faith said, they ought not to exist and if they said what his sacred book had already said, they did not need to exist.

So, many a time books have been destroyed but the books believed to have been lost or destroyed have reappeared either in their old form or in a new form. Since books are the product of man’s wisdom, experience, knowledge, feeling, imagination and vision so even if books are destroyed these qualities in men do not perish. The last words of a Danish priest of the second century, Ben Joseph Akiba, who was burnt alive along with his own compilation of the book of wisdom, are worth remembering here: “The paper burns, but the words fly away.”

There are people who love books better than their life. They preserve the books they love at great risks. According to Indian mythology, for instance, God was so fond of books that once when there was a deluge and everything was destroyed by water, Lord Vishnu took the form of a fish and rescued the Vedas.

In ancient times people had a remarkable knack for memorising texts. The Iliad and the Odyssey, two epics of Homer, the great Greek poet who lived 900 years before the birth of Christ, were remembered by professional reciters generation after generation. These epics together consisted of 28,000 lines. Some bards could even remember four times that length. The gift of memory brings to mind the Vedas, India’s earliest books and according to many the world’s. For a long time, the verses of Vedas were not written down, but passed on orally from father to son or guru to disciple.

The vedas were composed in an ancient form of Sanskrit. Although we have always had several languages in India, Sanskrit in olden times was used all over the country. Poets and scholars from every corner of India have contributed to Indian literature through the Sanskrit language.

The philosophy and sciences of ancient India reached distant lands. Along with them traveled to far-off countries beyond the Himalayas and across the wide seas many a jewel from India’s grand treasury of tales the Kathasaritsagara, the Panchatantra and the Jatakas. It is well known that many of the parables of the Bible, the fables of Aesop of Greece, the folk-tales collected by the Grimm brothers of Germany and the tales retold by Hans Andersen of Denmark had their origin in India.

India’s literary past is indeed great. We shall unravel together some of these great books which we shall talk about in the next article.

Go For It, Bablu!

Chitra Padmanabhan
It happened on the day school started after a heavenly two months of summer holidays. Shankar refused to wake up at 6 am. He...
5 Ws & H

Rama Kumaraswamy Thoopal
A cool glass of water topped with huge chunks of ice is sure to quench your thirst on a hot summer day. But, before...
5 Ws & H

B Sumangal
Among birds, pigeons have a natural and unerring instinct of returning to their nests or homes after long flights. In the early days besides...
5 Ws & H

B Sumangal
Would you doubt my word if I say that Doubting Thomas, one of the Apostles of Christ visited India and established Christianity? Don't. For...