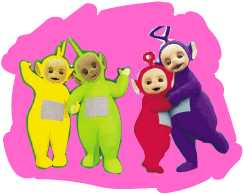 Share
Facebook
Twitter
Pinterest
ReddIt
Email
November 25: Meet Tinky-Vinky, Dipsy, Laa-Laa and Po. They are the Russian version of characters in Teletubbies, the British television series for toddlers. The four made an eagerly awaited debut amidst great hype and hoopla in Moscow. Their audience – 3,500 enthusiastic children.

The 365-episode series is not known as Teletubbies in Russia but by their Russian name Telepuziki or Telebellies. And they are going to be beamed into Russian homes by the state-run television, RTR, says an article in the ‘Indian Express’.

It’s not just the name of the series that has changed to suit the viewing pleasure of Russian babushka (little children). The script has changed too. For the past few months, four actors slogged at a studio in Moscow, to adapt the script. So the original and informal Teletubby greeting, ‘Eh-Oh’, has become the more formal ‘privyet’ or Russian word for ‘hello’. The British-sounding character Tinky Winky became the Russian-sounding Tinky Vinky.

But who exactly are the Teletubbies? Tinky-Winky, Dipsy, Laa-Laa and Po are four fluffy figures, living in a brightly coloured dream-like sunlit world. They talk baby language about many of the things that happen in the world around them.

Launched three years ago in Britain by the British Broadcasting Corporation, Teletubbies is immensely popular among children. It is broadcast in 36 languages to over a billion viewers, in 120 countries.

But Teletubbies is controversial too. The age group that they target, three and four year olds, should not even be allowed to watch television. Television stunts the development of children who are that small, say several well-known paediatricians or children’s doctors.

How much television should children view is in fact a hotly debated subject across the world. Paediatricians and other experts warn about the dangers of children becoming addicted to the ‘idiot box’ at an age when they should be exploring the world around them, learning things and being curious and alert. Experts say that television reduces them to passive recipients, who absorb everything without question. Even negative things like violence and hate.

Obviously there’s another side that doesn’t agree. Programmes like Teletubbies and Seasame Street (another popular TV series for children), they say, can have a real educational benefit for children. Stopping children from watching their favourite show altogether could be considered a form of deprivation.

“Children up to four years old don’t have that much information about the surrounding world, and this programme tries to fill it in,” says Grigory Vagner, director of Nota, the dubbing company that adapted the Teletubbies lingo, from English to Russian.

And the target audience reaction? You will have to kid around to find that out.

Saakshi Khanna
A routine college day. We had to go for textile practicals after lunch. Going for any class post lunch was a pain. All we...
Stories for Kids

B Sumangal
Raju and Savitri lived in Tanjore in the state of Tamil Nadu. Raju worked in the rice fields of a local landlord or zamindar...
Planet Earth for Kids

Fish That Live in the Desert

Moushumi Mohanty
We all know that fish live in water. But, there is a kind of fish which lives in the desert. Difficult to believe? Well, there...
Short Stories for Kids

Meera Uberoi
The atom bomb was dropped on Hiroshima ten years ago. I lived a mile away from the city so nothing much happened to me,...
5 Ws & H

B Sumangal
Among birds, pigeons have a natural and unerring instinct of returning to their nests or homes after long flights. In the early days besides...