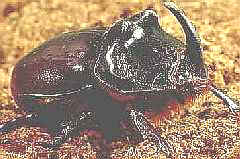 Have you ever had winged visitors to your room on a rainy day, that are black, shiny and button-like, and which fall to the ground with a distinct tapping sound? You might also be familiar with those cute-looking insects with bright orange bodies dotted with black, called Ladybirds, hovering over flowers and tender leaves. There also might have been times when an unlucky one splats on your windshield or gets crunched underfoot. Well, these are all different kinds of BEETLES — creatures that can be called evolution’s biggest success story.

When the noted scientist and philosopher J. B. S. Haldane was asked what his studies on nature had revealed about god, he replied, “An inordinate fondness for beetles”! Indeed, it might sound unbelievable if one says that it is not the huge elephants or mighty lions that dominate wildlife communities, but these seemingly inconspicuous insects. But its true that these ubiquitous beetles, belonging to the order Coleoptera – the largest order in the animal kingdom, constitute almost a fourth of all animal species found on earth. This group also includes more species than the entire plant kingdom does, and scientists believe that many more are yet to be discovered!

Such a large order encompasses the bizarre, the destructive, the attractive, and the beneficial. You will be amazed to know the strange ways of life and habits of some beetles. These marvels of diversity can be found almost everywhere and under all conditions — in rain forests, in ice fields, in sandy deserts and even under water!

There are beetles that can even move through water by walking on the underside of the surface as though it were a glass ceiling; and beetles that jet ski on top with the help of compounds spritzed from their abdomens! And, there are even beetles that make their way into museums and devour beetle collections! The list of sheer variety is just ceaseless.

Do you know the secret of the success of these beetles? What is it that makes them so tough and adaptable? The answer lies in their very defining characteristic — the hard body covering known as the elytra, which envelops the wings and abdomen like two halves of a shell. You might not believe it, but these elytra are actually a pair of hardened wings, evolved into thick covers subject to constant wear and tear! (In fact, the word ‘Coleoptera’ is derived from Greek words meaning ‘sheath-wings’.) The elytra is absolutely wonderful — it protects the insect against abrasion and predators, traps moist air around the wings folded underneath (in the case of desert beetles) and also stores air (in the case of beetles dwelling in water). It serves just like a multipurpose kit!

But in case you’re thinking that beetles are known for only their strange ways and little else, you’re mistaken. Because these friendly insects carry out the important task of pollination of flowers along with other agents. (Researchers also believe that beetles fuelled the origin and spread of flowering plants sometime between 245 and 65 million years ago — a period of an explosion of fragrance and colour that transformed the globe — because they were the premier pollinators among insects at that time!) Beetles inhabit critical ecological niches, and their scavenging helps remove animal wastes, carcasses, and dead plant matter converting it into rich soil compost. Also, some beetles are voracious predators of certain agricultural pests, and collectors sell them in bulk to gardeners and farmers for pest control.

But of course, beetles are both friend and enemy to agriculture, for some species attack the attackers, thereby reducing the need for chemical pesticides, whereas some even devastate crops.

For sheer destructiveness, few insects can match certain species of Bark beetles, which build up tremendous populations in conifers, resulting in the
loss of a lot of timber. Some beetles also transmit viral, bacterial or fungal agents that cause plant disease.

With more than a whopping 250,000 species of beetles known to inhabit the earth, it can be definitely said that it is a beetle’s world. And its not surprising that these small and often overlooked creatures run the ecosystems that sustain us! Meet some of our delightful beetle friends –

Passalids are highly social beetles that communicate through rasps and squeaks made by rubbing their wings against their abdomens! But scientists are interested in them for another reason – they produce a chemical that blocks the growth of fungus.

Some Tiger Beetles, a favourite among collectors, can run upto two feet per second. (For a racehorse, in proportion to its body length, this speed is equivalent to 250 miles an hour!)

Scarab Beetles (Ischiopsopha sparsa) are essential to ecosystems, as these beetles recycle plant matter and faeces. Some of them are brilliantly coloured, but the ancient Egyptians revered the black Dung Beetle, which seems like ever emerging from the ground, as the sacred symbol of rebirth!

Metallic Wood-Boring Beetles (Euchroma gigantia) are often called ‘jewel beetles’ because of their dazzling iridescence! As their name suggests, they bore into woods, thereby helping to speed the decomposition of wood in forests.

Ground Beetles (Carabidae) have elongated mouths to help them extract snail flesh from a shell! Most are ground dwelling, but some live on trees too.

Some beetles, like the African Scarab Beetle (Circellium bacchus), the Burying Beetle (Nicrophorus orbicollis) and some Bark Beetles, work in monogamous pairs! A pair of Burying Beetles can lie on their back underneath a carcass 200 times their weight and move it several feet!

Some beetles are chemical factories on legs. The larvae of a particular type (Diamphidia nigroornata), after feeding on the leaves of the Commiphora tree (found in Namibia), produce a toxin which is not found in the adults. This chemical is squeezed onto the tip of an arrow while hunting. The poison on a single arrow can fell an adult antelope!

The desert dwelling Darkling Beetle (Onymacris unguiculoris), is truly a magician because it conjures moisture where there appears to be none. Even in Africa’s harsh Namib Desert, dew forms at daybreak. As condensation forms on its shiny exoskeleton, the beetle tilts forward, sending water down its body and into its mouth!

Scientists have estimated that the descendants of a single female Ladybird (Hippodamia convergens) can eat about 200,000 aphids (a type of agricultural pest) in one season!

The Click Beetle (Chalcolepidus lacordairei), when it falls on its back, can flip over by itself by snapping its body into the air with a click!

Dropping Trees from the Sky – Hydroseeding

Woodpecker
Finally there is a simple solution to the growing problems of deforestation and the greenhouse effect - dropping millions of trees out of an...
Features for Kids

Sushama Shetty
Did you know that animals, birds, reptiles and humans learn the lessons of life through play? Any object can be used as a toy....
Biographies for Kids

Team Pitara
Martin Luther King Jr. goes down in history as one of the principal leader of the civil rights movement in the United States and...
Stories for Kids

Ramendra Kumar
On the outskirts of a bustling city near the sea coast was a zoo named Kananvan. It was famous all over the world for...
5 Ws & H

Ajay Dasgupta
Which is the most famous sheep in the world? A sheep called Dolly. But why is Dolly famous? That is because unlike other sheep's, Dolly...